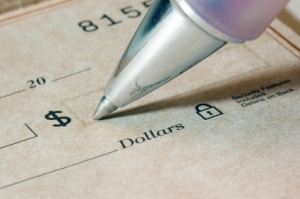 The wife and I have reached an inevitable impasse after several weeks of heated and uncompromising negotiations over our mounting debt problems and inability to balance the household budget. The show stopper came when she insisted we borrow more money from our creditors – in order to better manage our expenses – rather than risk defaulting on our financial obligations.

Suffice it to say that I, being the sounder voice of reason, totally disagreed. In my opinion, the proposal was the typical socialist knee-jerk solution to a common free market problem: The periodic shortage of cash.

“Borrowing more money is totally out of the question.” I responded, quite matter-of-factly. “Doing so would only saddle us, our children and probably their children, too, with undeserved debt for countless generations to come. We’d be mortgaging their future. Is that what you wanna’ do?”

She just raised an eyebrow and stared at me. The kind of stare that, in another day and time, would have probably turned me to stone.

“Then perhaps you should adjust the rates you charge your corporate clients to the same rates you charge the smaller companies? After all,” she said. “They’re making more money than the U.S. Mint. Surely they wouldn’t object to sharing a little more of it with you?”

It was clear to me, at that moment, that my other half had not only lost her mind; but she couldn’t possibly have understood the plain and simple dynamics of trickle down or supply side economics. “That’d be crazy?” I countered. “Those record profits you’re talking about are poured back into the Corporation. What incentive would they have for staying here and creating more jobs if I, and every one else who failed to be financially responsible, believed the answer to their money problems is simply to demand more money? What we really need to do,” I said, pointing to the stack of bills on the table, “is search for some cost cutting measures we can agree upon, and eliminate some of the unnecessary entitlements around here that no one is really entitled to.”

“OK!” She agreed with a sigh, then raised that God forsaken eyebrow of hers yet again. “Let’s start by downgrading the cable TV and high speed internet service from full to basic, and cancelling all those unnecessary services on your smart phone and tablet? That’ll save several hundred dollars per month.”

“Oh hell no!” I objected. “You know full well that NFL training camp and the pre-season are right around the corner –  now that the lock-out is over. And how am I supposed to watch Netflix without high speed internet? How about cancelling this year’s vacation and those frivolous monthly shopping trips with your girl friends?” I said, returning her stare, raised eyebrow to raised eyebrow. “Your family doesn’t like me anyway, and I don’t care too much for them either. And if you come back here with one more pair of shoes I’m gonna’ call Hoarders on you!”

We went on like this, back and forth, tit for tat, for several hours. She suggested I sell the wide screen TV, my high end stereo and video equipment, and downgrade to a smaller, more fuel efficient car. I suggested she sell her jewelry and crystal collection, cancel her membership at the spa and fitness center –  since it wasn’t working anyway –  and learn how to cook a decent meal so we wouldn’t have to eat out so much.

Finally, angry and frustrated, she relented. “Fine!” She said calmly, as she rose from the table. “I’m tired and going to bed now. Do whatever you think is best. Whatever you feel is right. It really doesn’t matter to me what we cut or what we keep; or if we default and lose everything we have. As long as I have you and the children,” she said with a wry smile, “I have everything I need.”

I could almost sense my ensuing victory when she raised that eyebrow again, then quipped just before she turned and headed toward the bedroom. “Maybe we all can stay with my parents until we get back on our feet?”

Later that night, as I lay awake in bed basking in the glow of my dubious victory, I felt somewhat guilty for not having agreed to a single concession she’d asked for. The sound of her breathing told me she wasn’t asleep either.

“I’ll call the bank in the morning and request an increase on my line of credit, and I’ll also increase the rates I charge my major clients, if you’ll do one thing for me?”

“What’s that?” She answered.

“Cut off those darn eyebrows of your’s!” I replied.

She chuckled. “Not a chance. In fact, I think I’m gonna’ get them arched. Now go to sleep.” She added. “You’ve got a busy day tomorrow!”