The sign and website reads welcome to Hackettstown. Located in a valley along the banks of the Musconetcong River in Northwest New Jersey, USA. Founded in 1853, Hackettstown is home to Centenary College and M&M/Mars, Inc. The town is dedicated to its citizens and to preserving the quality of life that we enjoy.
What neither says is:
BUT NOT IF YOU ARE BLACK!
This is the stark truth I’m reminded of, yet again, as I’m cruising down Main Street the other morning in this good-ole-boy, Northwestern NJ town. I’m chatting with my Mrs. – about everything in general and nothing in particular – when I suddenly hear the faint blast of a siren. I instinctively glance up at the rear view mirror where I note the drivers behind me slowly moving to the right. I don’t see the source of the commotion until the driver in the vehicle directly behind me pulls over and unobstructs my view. It’s a patrol car. I start moving over in typical fashion so the vehicle can pass, but, to my surprise, it doesn’t pass. It pulls over, too! Directly behind me and stops… lights flashing.
“Well I’ll be damned!” I exclaim, shaking my head in disbelief. The expletive startles my wife.
“What’s wrong?” She asks.
“You’re not gonna’ believe this, but I’ve just been profiled by Hackettstown Police.”
Her expression is incredulous. “How do you know that?
“Because I’m DWB, with dreds no less!” I answer, matter-of-factly, as I unbuckle my seatbelt and lean towards her to pull my wallet out of my rear pocket. “This is what they do in Hackettstown, babe, if you’re DWB.”
We sit there waiting while the as yet unseen and unidentified bastion of the law runs the tags on my Jeep. “Were you speeding?” She asks.
“Nope! Was four miles under the posted speed limit.” I say, as I place my right hand at the twelve o’clock position on the steering wheel, and raise my left hand, which is now holding my open wallet. “Just sit tight.” I instruct her. “And be prepared to call the office to let ’em know you’re gonna’ be late.”

Eventually, a white male, whom I would later come to know as Officer I.D. number 0044 emerges from the patrol car. He’s about six feet tall, give or a take an inch, with dark hair and an above average build. The western NJ version of Kronk I surmise. I immediately wonder how many days a week this guy spends in the gym when he isn’t at the bar. And I conclude he probably has more than a few obvious red flags in his psyche eval that no one will note until the ex-girlfriend he’s stalking takes out a restraining order the day before he kills her. I watch him in the side and rear view mirrors as he cases my Jeep; walking first to the passenger side until he’s close enough to peer into the front seat through the rear window. Then he doubles back around the rear and walks up to my window, which is already down. I look directly at him. His face is blank, formless, his eyes cold and lifeless; as if he were hiding behind a sheet. The expression on my own face reveals what I dare not say in my wife’s presence.
“Can I see your driver’s license and vehicle information?” He asks, almost sounding like Kronk.
I hand him my PA DL, which I pull from my already open wallet, along with the vehicle registration and proof of insurance that I ask my wife to retrieve from the glove compartment. He scans the DL, the second line of which contains my DOB, and I watch his expression change from Robo-cop to Bobo-cop as he does the math. Then came the lie. “I pulled you over because you were driving without your seat belt on.” He says.
Wishing I’d buckled my belt back, I look over at my wife just in time to hear her gasp and see her chin drop. My smile says told ya’!
“Is that right?” I say to Kronk, unable to mask my sarcasm which is now acidic.
“Yes sir,” is his reply. “We’re enforcing traffic safety laws this month.” He then subjects me to the typical littany of questions: Where you coming from? Where you going to? And appears genuinely disappointed when the answer isn’t from and to the scene of a crime. I tell him my wife had an appointment in town, for which she would now be late, and I remind her that now would be a good time to make that call and let them know. I wait for him to ask if I or we had any warrants, but he asks instead if I’d ever had a NJ driver’s license?
“Yep, about thirty-plus years ago!” I tell him. “But I’m almost certain you weren’t here, then.”
He nods. “That was a long time ago.”
“Yes it was.” I say. “But you make it seem like only yesterday.” 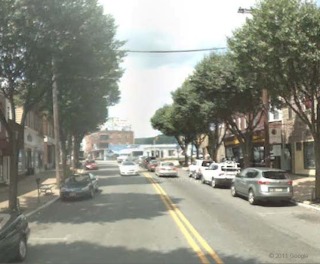 We sit there for about ten minutes while he checks me for warrants I knew didn’t exist. When he returns he hands me my documents and a citation for driving without a seat belt.
“There’s no summons or points for this, and it’s only a small fine that you can pay on-line. Drive safely.” He says. Then he returns to the patrol car and drives off, probably wishing he could have justifiably shot me. To my surprise, he doesn’t follow me through town to corroborate my story. Or shadow me to the city limits like his colleague did the last time I drove through town.
I share my morning adventure with several of my colleagues when I return to work that afternoon, one of whom actually lives there. We both make light of it and enjoy a good laugh. He shares a few stories of his own, and I conclude, then, that he may be the only reason why God hasn’t smote the place.
I spend the rest of the day wondering if he or those who live there knew what it felt like to be stereo-typed, categorized and otherwise summed up after a glimpse that could not have taken more than a few seconds? But then, I figured, this blog post actually serves that purpose!

2 Replies to “DWB in HacKKKettstown, NJ”